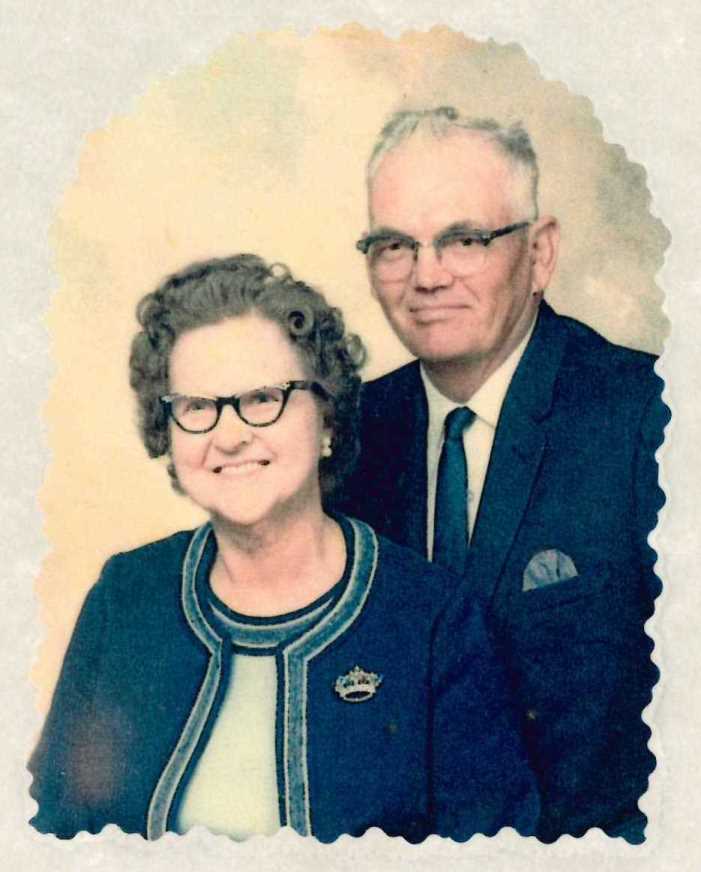 Hard work, love of family and community, and faith in God are qualities that many try to infuse in their lives. John and Martha Leising embodied these traits.

Two of their children, Carolyn Maciejewski and Allen Leising, know this better than anyone. “From career choice, work ethics and education, to being a team player, Mom and Dad influenced all of our lives. I know they were proud of us as we were sure proud of them,” shared Carolyn. “And their faith in God was a big inspiration,” Allen added.

With the John and Martha Leising Scholarship Fund of the Rush County Community Foundation (RCCF), John and Martha’s legacy lives on in the values they have instilled in their family and the support this creates for students attending Purdue University.

Both were born in Franklin County, Indiana. Martha was the valedictorian of her 1929 Brookville High School class. John was one of the most determined individuals a person could meet – a quality that would carry him through not one, but two tragedies later in life.

The couple was married in 1934 and then moved to their Rush County farm, which still belongs to their family today. They raised milk cows, chickens, hogs and cattle. They also grew strawberries, pumpkins, sweet corn, field corn, soybeans, wheat, tomatoes and alfalfa. They loved the freedom that farm life provided them.

Eleven years later, the Leisings were forced to confront the worst tragedy a parent can endure. They lost their daughter Marilyn, just 2 ½ years old, in a horrible farming accident. Their strength and their love of God and farm life carried them through their grief. So did their five surviving children and spouses – Maurie (Pat) Leising of Clawson, MI, Bob (Nancy) Leising of Milroy, IN, Marilyn Marie Leising (deceased), Larry (Cathy) Leising of Missouri City, TX, Carolyn (Chet) Maciejewski of Troy, MI, and Allen (Kris) Leising of Milroy, IN.

The couple purchased Milroy Frigid Lockers in 1947. They managed and operated the business, butchering and processing meat for 57 years. Allen recalled, “My mother was so mad at Dad after he bought the locker plant. Prior to her death in 1998, she said it was the best thing that ever happened to her. She was able to meet all the outstanding people in the community. She loved Rush County even more.”

In 1966 another terrible farming accident left John with a broken back. The doctors informed the family he would never walk again. John, who was 60 at the time, not only walked again, but fought his way back using only a cane.

Carolyn, who lives in Michigan with her family, recalled visiting her parents one weekend. “My parents were devout Catholics and there would have to be something seriously wrong for them to miss mass. Indiana was hit with an ice storm, and we woke up Sunday morning to a sheet of ice. Mom and Dad got up and put their Sunday clothes on. Dad needed his cane for support. As he headed toward the back door to get in the car, I literally stepped in front of him and said he was not going outside. He ignored me and started outside again. I announced that he was not going anywhere. He looked at me and turned and went back to the bedroom to change. But before I was out of ear shot, he had to say, ‘Gee, I got my suit on and everything — for nothing!’ His drive was amazing, and he was admired by everyone that knew him,” she said.

Fast forward to 2018. John and Martha’s grandchild, Adam Leising, was accepted to Purdue University, with plans to study Agricultural Economics. Adam was awarded scholarships from the community his grandparents loved through RCCF funds. Now a sophomore at Purdue, Adam is involved with the National Agricultural Marketing Association, Purdue’s Grand Prix and fraternity life, in addition to being part owner in the cow-calf operation his family runs on their farm.

In a coming full circle moment, the family has established the John and Martha Leising Scholarship Fund to support students attending Purdue. Three of the Leising’s children – Maurie, Larry and Allen are Purdue graduates as well as their great grandchild, Jordan. They see it as a permanent way to help Rush County students and fellow Boilermakers in need. They are able to celebrate the generosity of their parents and give back to a community that meant so much to them and means so much to us.

If supporting secondary education is a passion for you, please consider making a donation to the John and Martha Leising Scholarship Fund or any other of our scholarship funds.

Rush County Community Foundation6 hours ago
Each gift you make in memory or in honor of a loved one supports the people, places, and programs of Rush County forever. What a beautiful tribute! ❤
View on Facebook

Rush County Community Foundation20 hours ago
✋🏻Wait! Before you scroll on by... this is NOT a #GivingTuesday post!✋🏻
Instead of asking for your donations, could we ask a tiny favor? Please help us find our next executive director and share this info with your network. We appreciate you! 🙏🏻

Rush County Community Foundation2 days ago
We are honored to accept donations in memory of Dr. Deborah S. Hartzler. Debbie helped the community grow in so many ways - through her family, students and flowers alike. Your gifts will honor her memory forever. Please send donations in c/o: RCCF, 117 N. Main St., Rushville, IN 46173
7    View on Facebook

Rush Co Foundation · 6 hours ago
@GiveINRush
Each gift you make in memory or in honor of a loved one supports the people, places, and programs of Rush County forever. What a beautiful tribute! ❤ https://t.co/Pwfxr9PMfW
View on Twitter
1
0

Rush Co Foundation · 1 day ago
@GiveINRush
✋🏻Wait! Before you scroll on by... this is NOT a #GivingTuesday message!✋🏻
Instead of asking for your donations, could we ask a tiny favor? Please help us find our next executive director and retweet this info. We appreciate you! 🙏🏻 https://t.co/73KKbimAH2 https://t.co/Tbp7G0TxUE
View on Twitter
2
0