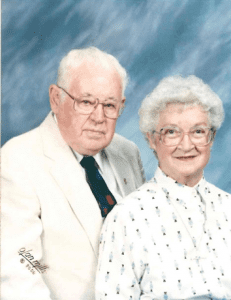 George Patrick “Pat” and Martha Todd were born and raised in Rushville and spent much of their lives helping their community. They ran ToddFuneral Home, created an ambulance service for Rush County, and opened Hillside Haven Nursing Home all while raising their eleven children. Mr. and Mrs. Todd were hardworking and dedicated individuals who believed in lending a helping hand wherever they could—a conviction that they passed onto their children.   Their eldest daughter, Ann Curtis, decided to create the Pat and Martha Todd Charitable Fund to carry on her parents’ memory, as well as their legacy of generosity.

The Todd fund was created in 2003 to honor Pat’s memory after he passed away the year prior; it was later amended to include Martha’s name after she passed away in 2017. Pat and Martha were married for 56years, and much of that was spent serving Rush County—whether it be in the form of one of their three businesses, community involvement, or simply lending a helping hand to someone in need.

Caring by nature, Martha was a registered nurse—she entered Indiana University’s School of Nursing through the Army Nurse Corps, though the war ended just as she completed her education. Pat took over his father’s business and ran the funeral home and ambulance service; three of Pat and Martha’s sons followed him into the funeral business as well. Martha dedicated much of her life to geriatric care in the nursing home and four of their daughters entered the health care field.Mr. and Mrs. Todd both lived out their Catholic faith as membersof St. Mary’s Catholic Church, and even helped start the St. Mary’s School Foundation.

After decades of hard work, they retired and sold their businesses to travel the world. They spent their lives happily, surrounded by their family and the community they loved. Ann is happy to see their RCCFfund working to make an even longer-lasting impact on Rush County. She stated that her parents inspired her to be philanthropic and taught her that there is more than one way to give. Even if you don’t have money, all you need is a little devotion and time to make a difference in your community. She hopes that the Pat and Martha Todd Charitable Fund will allow their memory to live on and continue to benefit their home community forever.

Rush County Community Foundation10 hours ago
There are many reasons to have a will. Some you may not even have thought about. Do you have a pet you want cared for? Here are 9 more important and surprising reasons: https://www.freewill.com/learn/10-reasons-to-have-a-will
View on Facebook

Rush Co Foundation · 1 day ago
@GiveINRush
There are many reasons to have a will. Some you may not even have thought about. Do you have a pet you want cared for? Here are 9 more important and surprising reasons: https://t.co/l6pxOaNPnJ https://t.co/H5s8TNVv63
View on Twitter
2
0