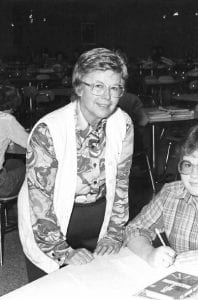 The Martha Perin Community Grant Fund was established in 2015 by her son and daughter-in-law, Keith and Kim Perin. This fund was created in the hopes of carrying on Martha’s generous and compassionate spirit in Rush County.

Martha was a hardworking high school teacher and mother of three, and she had a passion for reading, educating, bird watching, and politics. She was heavily involved in her community in a variety of ways and was notably the first woman chairperson for county council—an impressive feat as a Democrat in the 1970s.

When asked what prompted him to start a fund in his mother’s memory, Keith said that it was largely due to the number of people that still approach him with stories of how wonderful his mother was 35 years after she passed away in 1983. He also noted the significant impact his mother had on her students in particular, saying, “Decades after my mother’s death, former students still tell me how much they loved her and learned from her. She also loved her students and the Rush County community, so I think she’d be pleased that the fund in her name will help so many local people for centuries to come.”

Martha had a legacy of respect, honesty, and toughness that she channeled into her classroom. She sought to support and befriend all of her students—not just a select few—because she believed that everyone had a right to an education and that their education should be about their needs rather than standardized tests. Her lasting impact on those that she taught is a testament to her dedication to her work.

Her memory is being carried on by all of those that she touched during her life, and it is now able to be preserved even further with her community grant fund. Though they considered creating an education fund in memory of the years Martha spent as an educator, Keith and Kim chose to do a community fund because they believed that it would have more potential to reach as many people as possible throughout the community that Martha cared for so deeply. The Martha Perin Community Grant Fund provides grant funds to support needs for local nonprofit agencies and community projects, making a significant impact to several Rush County residents every year—which is a wonderful way to carry on the legacy of a woman who impacted so many during her lifetime.

Rush County Community Foundation21 hours ago
Which ones make you smile?

2021 was another year we couldn’t have predicted. It was certainly filled with ups and downs. But the list you’re about to read is full of two qualities – impact and hope. In honor of our 30th anniversary in 2021, we thought it would be fun to take a look at 30 highlights of … Read more
View on Facebook

Rush Co Foundation · 2 hours ago
@GiveINRush
Which ones make you smile most? https://t.co/yVgkcQVlUY https://t.co/Fs8OVqUJ64
View on Twitter
1
0