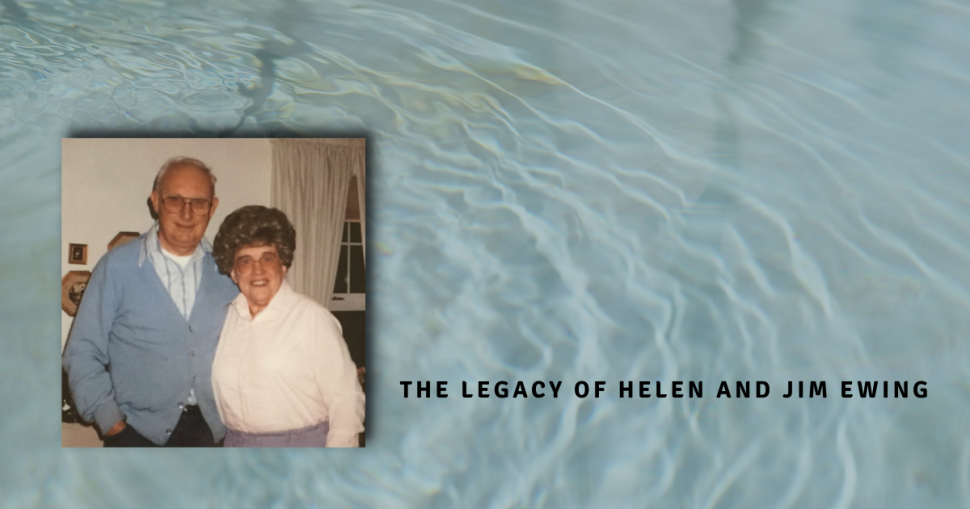 Kindness. It always matters. And like the stone that creates ripples when tossed into a pond, its effects can be far-reaching.

Roy Mohr first met Jim Ewing in 1968. Roy was a regular customer at J & H Hardware, the store Jim and his wife, Helen, owned in downtown Rushville. Roy and Jim became better acquainted through their volunteer work with Habitat for Humanity and St. Mary Catholic Church. Twenty years after their introduction, their relationship had grown into a friendship.

Jim and Helen didn’t have children or any family nearby. Roy took it upon himself to offer his help when needed. When he tossed that stone, he couldn’t have imagined the profound effect those ripples would create.

Jim was born south of Carthage and spent his early years farming, before leaving for the Army. It was during his service that he met Helen, who was from the East Coast. They married in 1946. Business was Jim’s calling. He and Helen owned and operated an appliance store in Knightstown for 13 years, before opening their shop in Rushville. He was a sharp investor and very handy. He felt strongly that young people should have a skill. Helen was thrifty and by many accounts, considered to be the REAL businessperson in the relationship. Being twentysomethings during the Great Depression no doubt influenced their financial decisions.

Helen and Jim cared deeply about the community. Throughout their lives they were active volunteers serving their church, Habitat for Humanity, and the Salvation Army. After Helen passed away in 2014 (at age 98) Jim depended on Meals on Wheels to provide him with hot meals. After years of serving their community, Jim felt very fortunate to be a beneficiary of others’ kindness.

Roy served as an RCCF board member and shared with Jim the pride he felt in the work being done in the community through the Foundation. Jim had followed the impact RCCF was making through articles in the newspaper and was impressed. Jim valued Roy’s friendship and advice. Upon Helen’s passing, he had reviewed their estate plans and decided to make some changes. He was interested in creating a fund at RCCF to honor Helen but also to pay forward the compassion he had received.

Roy arranged a meeting between himself, Jim, and RCCF. During that first meeting, Jim began the Helen and Jim Ewing Fund To Help the Elderly and Feed the Hungry. He decided the fund should award grants to agencies that distribute food to the needy and provide essential needs and services to the elderly.

Jim continued to meet with RCCF staff and quickly endeared himself to them. “I never had a chance to meet Helen, but I adored Jim,” smiled Alisa Winters, RCCF Executive Director. “So much so that I made pointed efforts to take walks and runs past his house to check up on him.”

Before his passing, Jim updated his will to leave the residual of his estate to RCCF with 70% going to the Ewing Fund and 30% to a scholarship that supports a student(s) pursuing a trade. In the eight years since, his generosity has provided more than $106,000 in grants! The Ewing Fund has vastly improved the quality of food distributed through the Rush County Community Assistance Food Pantry, Milroy Community Food Pantry and Gleaners Mobile Food Bank. It has made highly nutritious food readily available, including one of the biggest requests – milk. In 2019, Rushville Psi Iota Xi received an award to help purchase hearing aids for low-income, elderly residents.

“I can’t help but tear up thinking about the impact his fund is making. He, and undoubtedly Helen, would be speechless at the number of people they have helped,” reflected Alisa.
His legacy gift also provided additional scholarship awards to assist students attending an accredited trade or vocation school. “It was a gift to know him and it’s an honor to know that causes he and Helen were passionate about will benefit forever from their generosity.”

Roy’s kindness touched Jim. Jim and Helen’s compassion was felt throughout the community by their volunteer service. Meals on Wheels supported Jim when he needed help. Jim and Helen’s fund will care for their community forever. It just goes to show that you never know how much your kindness means to someone else.

If setting up a fund to support the needs of Rush County is something that calls to you, we can help your kindness ripple throughout the community for all time. For more information please visit our legacy giving page to learn more. Or get in touch with Alisa at awinters@rushcountyfoundation.org or (765) 938-1177. You never know who those ripples will touch and what new kindness you might inspire, too.

Rush County Community Foundation5 hours ago
Each gift you make in memory or in honor of a loved one supports the people, places, and programs of Rush County forever. What a beautiful tribute! ❤
View on Facebook

Rush County Community Foundation19 hours ago
✋🏻Wait! Before you scroll on by... this is NOT a #GivingTuesday post!✋🏻
Instead of asking for your donations, could we ask a tiny favor? Please help us find our next executive director and share this info with your network. We appreciate you! 🙏🏻

Rush County Community Foundation2 days ago
We are honored to accept donations in memory of Dr. Deborah S. Hartzler. Debbie helped the community grow in so many ways - through her family, students and flowers alike. Your gifts will honor her memory forever. Please send donations in c/o: RCCF, 117 N. Main St., Rushville, IN 46173
View on Facebook

Rush Co Foundation · 5 hours ago
@GiveINRush
Each gift you make in memory or in honor of a loved one supports the people, places, and programs of Rush County forever. What a beautiful tribute! ❤ https://t.co/Pwfxr9PMfW
View on Twitter
1
0

Rush Co Foundation · 23 hours ago
@GiveINRush
✋🏻Wait! Before you scroll on by... this is NOT a #GivingTuesday message!✋🏻
Instead of asking for your donations, could we ask a tiny favor? Please help us find our next executive director and retweet this info. We appreciate you! 🙏🏻 https://t.co/73KKbimAH2 https://t.co/Tbp7G0TxUE
View on Twitter
2
0