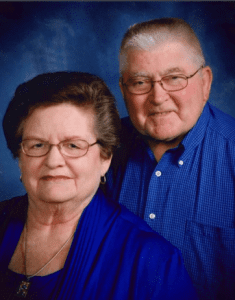 Charles and Jane Niccum are hardworking Rush County residents that believe in giving back whenever possible. Their generous spirit is what lead them to create the Charles E. and Jane Power Niccum Fund in 2013— to enable them to extend their generosity to their community in the form of grant funds.

The Niccums have a long history of involvement in Rush County. Charles has served on the Finance Committee, St. Mary’s Catholic Church, the St. Mary’s Catholic School Commission, and the County Extension Board (of which he was both a member and the president). Charles is also involved in the Milroy Economic Development Corporation (MEDC), Milroy Community Club, and the Ag Roundtable. Jane has been a member of the Home Economics Club and the Milroy Psi Iota Xi philanthropic sorority for 40 years, and she has a long history of involvement with the 4-H Council and St. Mary’s Catholic Church as well.

Charles and Jane were also involved in the community through their work—they owned Niccum Seeds for 35 years (1977—2012) and ran detassseling crews for several years. Charles said that he is most proud of their ability to help influence adolescents in the community, both their own children and the youth that worked for them, to teach them about good work ethic and the “value of a dollar.” To this day, they still have former workers approach them with stories about how much they taught them during the summers they spent with them. It’s a value that they also passed onto their 4 children, Eric, Jennifer, Mark, and Cheryl, who have in turn passed it onto their children.

When asked why they decided to create their fund, Jane said, “The community has been good to us.” Jane was the one to pose the idea of creating the fund, as a way to give back to the community that had given so much to them. Both Jane and Charles have always loved to give as much as possible, and they knew that creating a fund was a much more permanent way to do so.

The Niccums also knew that Rush County is already so blessed with our large number of scholarships, so they wanted to create a fund that could benefit the entire community. They wish to help spread the wealth to the parts of the community that need it most. There are not always funds available to those who need it, so they hope that by having another fund available to RCCF, the community will have yet another resource to rely on in times of need.

Jane and Charles believe that you can make a big impact with even the smallest of actions. They always ask their children to donate to charities in lieu of giving them gifts, and they stressed that donating in small amounts whenever you can adds up faster than you think. They started their fund to make their donations go even further in the community, and they hope that it will only continue to grow as the community’s needs do.