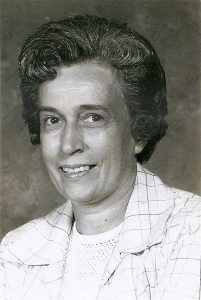 Alice Ruth Wiley was a wonderful woman who dedicated her life to education. She graduated from Milroy High School in 1943 and earned her bachelor’s degree from Ball State Teachers College in 1947. She went on to have a long, 43-year career as a schoolteacher in Rush County.

Throughout her time as a teacher, she taught business, typing, and 6th, 7th and 8th grade math at Sandcreek, Mays, Milroy and Rushville schools.  She was also the Chapter One Mac Program director for 10 years before retiring in 1991.

It goes without saying that Alice was an inspirational teacher who touched many throughout her life. Which is why her husband, Glen Wiley, and two children, Linda Eineman and Joe Wiley, chose to preserve her memory with the Alice R. Wiley Scholarship Fund.

Both Alice and Glen encouraged Linda and Joe to get involved in the community whether that be by lending a helping hand or providing financial support. So, they could think of no better way to carry on their mother’s memory than by creating a fund to support Rush County students who dream of becoming teachers. The scholarship fund recognizes both Alice’s legacy as an educator and her philanthropic spirit.

Alice was able to touch the lives of many students during her time. Even as an adult, decades after his mother’s retirement, Joe still hears stories of how Alice had a positive impact in the community. One former student described her as “such a special lady who was such a big influence on my childhood,” verbalizing a sentiment shared by countless others.

It is the Wiley family’s hope that upon receiving the scholarship, a student will be able to go on to become a teacher and have a positive impact on young people for many years to come.